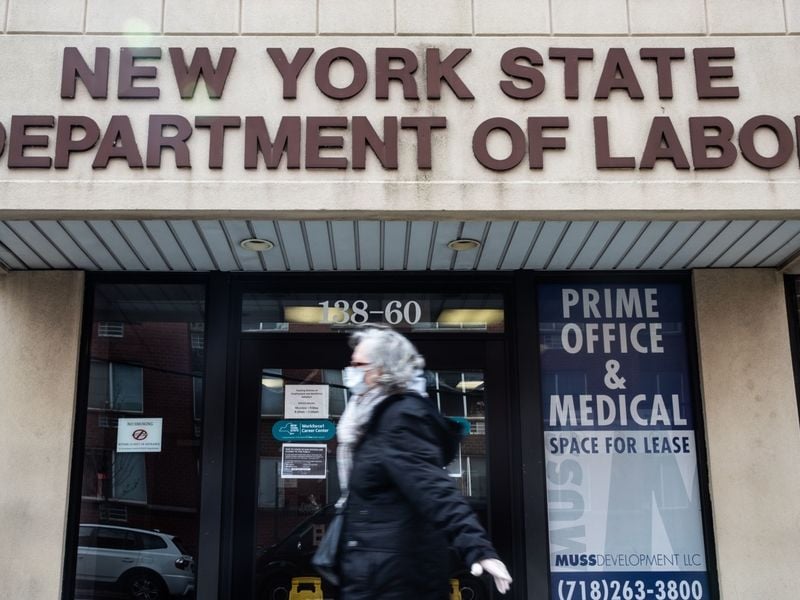 The state has worked to clear a great deal of its claims backlog, observers told Crain’s, but many New Yorkers are still waiting for their benefits. The $600 extra federal payment that has boosted the weekly unemployment checks of nearly 3 million New Yorkers since March expired today—yanking nearly $1 billion total in income from New York. In its place, Republicans in Congress are supporting a bill that would replace the weekly bonus with one equal to about two-thirds of a workers’ prior wages.

For labor systems already stressed by historic levels of claims across all 50 states, implementing that calculation could cause nightmarish delays.

“States simply do not have an easy way to comprehend that number, and it would take a long time to process,” said Andrew Stettner, a senior fellow at The Century Foundation, a think tank. “The new bill would expire Dec. 31—I’d say states would be lucky to get it done by then.”

The National Association of State Workforce Agencies, a trade group that includes New York, is warning that the policy would indeed take five months to implement. A New York Department of Labor spokeswoman declined to comment on pending legislation.

There are currently 2.7 million New Yorkers receiving some type of unemployment benefits. New York state extended unemployment availability for those New Yorkers for an extra 20 weeks on top of the 39 previously available, but that will not include the federally funded $600 extra per week and its not clear how long the state would need to process the new federal bonus payments, should those get approved by Congress.

Some New Yorkers are still waiting on checks from the beginning of the pandemic.

“The number of calls to my office about claims went down drastically in June and July, but there are still these cases not processed since April,” said Assemblywoman Aravella Simotas of Queens.

Every state labor office struggled under the historic levels of demand brought by the pandemic. During the week with the highest initial claims, April 4, about 3.9% of people in jobs eligible for unemployment applied for the insurance, five times higher than the peak percentage during the Great Recession, according to the Tax Foundation.

After New York’s system crashed several times in the first weeks of the pandemic shutdown, Cuomo tapped Google to launch a new cloud-based application that has held up to the demand. Verizon created a new phone system to process 40,000 calls per day, compared to 8,500 in March.

Google’s application replaced a mainframe computer system designed in the 1970s. The state awarded a contract in 2019 to Tata Consultancy to update the application process, but the work had not been completed by the time the pandemic hit.

“This all boiled down to not making the right investment in their technology,” Sen. Jessica Ramos, chairwoman of the labor committee. “It can feel like everything is stuck in the Nelson Rockefeller era.”

Deanna Cohen, a spokeswoman for the state Labor Department, says officials there moved “faster and more aggressively than any other state” to get people their money, citing the partnerships with Google and Verizon.

But some New Yorkers are still waiting for their money. Leo Gertner, an attorney who was laid off from his position with a musicians’ union in late February, said he is still waiting after applying for unemployment on March 2.

The Manhattan resident said he has sent in documentation verifying out-of-state income and complied with other paperwork requests. But he has been unable to get through for months to get an answer on his claim.

“I’m no beginner in employment issues,” said Gertner, who previously worked for the National Employment Law Project. “So for someone like me to hit so many dead ends when I know the system and know the bureaucracy, it is pretty amazing.”

The state has paid $34 billion in unemployment benefits to more than 3.2 million New Yorkers already this year, according to Cohen.

That number is evidence that New York has paid claims faster than its large-state peers. California has paid $50 billion despite having double the population. About 2 million more people live in Florida than New York, yet Florida has paid out just over $12 billion in claims.

Pennsylvania, for one, has outperformed New York in getting claims paid, with nearly $30 billion total despite a population about a third smaller.

Included in that backlog is Iris Ebert, a visual designer in Brooklyn. Ebert lost her contract job with a nonprofit in May, after initially having her hours reduced by the pandemic. When her first unemployment claim was denied, she sent in an appeal with further proof of her income from last year—which included work abroad. She has been waiting since the end of May for a decision on the appeal, and she said she can’t get a representative on the phone.

“I’ve had to spend very, very carefully,” Ebert said, “because I don’t know if this is just going to be two months of lost time [or] I shouldn’t expect to get anything.”

A Facebook group, Help Us—New York State Unemployment Issues, which launched at the end of March, still gets more 100 posts each day seeking advice in navigating the system. The group has nearly 46,000 members.

The Senate and Assembly plan to hold a joint hearing Aug. 13 on the state’s response to Covid-19. It is likely to include questions on the distribution of unemployment insurance.

“We need to understand how so many holes were exposed in our safety net during these months, more than ever before,” Ramos said.

In Washington, President Donald Trump indicated Thursday he would be open to a one-week extension of the $600 unemployment bonus. Senate Democrats, who rejected such GOP overtures as a stunt, pushed instead for an extension through the end of the year as part of a larger economic-relief package.