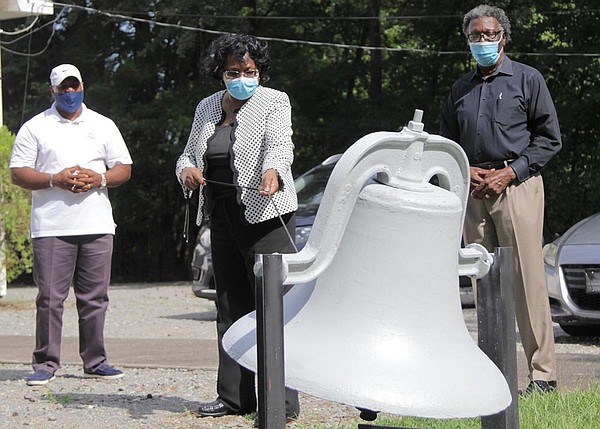 PINE BLUFF — The late Democratic Rep. John Lewis was honored in Pine Bluff by the ringing of a bell at Elm Grove Baptist Church for 80 seconds Thursday, one second for each year of the Georgia congressman’s life.

The tribute, which was coordinated with churches across the country to begin at 10 a.m. just as Lewis’ funeral was set to begin in Atlanta, was organized by the Pine Bluff Faith Community Coalition Ministerial Alliance in partnership with the National Council of Churches.

The Pine Bluff event was part of the “Ring the Bells for John Lewis” tribute organized and promoted by the National Council of Churches, said Jesse Turner, pastor of Elm Grove Baptist Church and the local organizer.

Pastors of two other churches in Pine Bluff, Barbara Douglas of St. Luke United Methodist Church and R.L. Davis of Bethany Chapel, participated in the tribute. Davis opened the ceremony with prayer just before 10 a.m., and precisely at 10, Douglas began ringing the bell in front of Elm Grove Baptist, striking the clapper 80 times while Turner kept count.

[Video not showing up above? Click here to watch » https://www.youtube.com/watch?v=OtZ3wnG-OHI]

Although attendance was limited to the three pastors and the news media, Turner said he had expected a light turnout, saying he received notice of the tribute late Tuesday.

“By then, it’s hard to get preachers together because they have a lot going on, what with meetings, sermon preparation and what have you,” he said. “But what’s important is that we are here together to represent the churches and the congregations here in Pine Bluff, and to pay tribute to a great man.”

Turner said he was most inspired by the fearlessness that Lewis demonstrated in the early 1960s as one of a core group that organized boycotts, marches and voter registration drives, and met violent opposition to the civil-rights movement with nonviolent resistance.

“Lewis wanted to help gain the right to vote for African Americans and he was willing to do whatever it took to make that happen,” Turner said. “They went across that bridge knowing that violence was waiting for them on the other side, but they went. They did what it took,” he said, referring to the Edmund Pettus Bridge in Selma, Ala., site of a pivotal march in 1965.

Turner, who is the director of Pine Bluff Interested Citizens for Voter Registration, said he hopes the example set by Lewis and contemporaries in the civil-rights movement will serve as an inspiration to Black people to exercise the right to vote, and to use that vote to effect change.

“Nothing should stop us. If they say we aren’t going to do mail-in ballots, that shouldn’t stop us,” he said. “If it means standing in the rain, if it means social distancing, whatever it means to get to the polls, we should do it.”

Davis said he was honored to be part of Thursday’s event, and said Lewis’ life was a testament to the power to bring about change that one person can have.

“It transcends all racial differences and goes to the heart of humanity,” he said. “It shows the power and potential of each person to make a difference. As a pastor, I believe he showed such an undeniable contribution to society, to the hope of a better tomorrow, that we can spring forth with the best of ourselves as we saw with him.”

Douglas said the day brought forth conflicting emotions as she considered the impact that Lewis had in his life.

“Today is a moment of celebration as well as a moment of sadness knowing that Congressman Lewis is the last of the Martin Luther King Freedom March group,” she said. “I pray that this day will be a day of celebration and picking up the mantle to continue the fight for racial equality. We must pick up the fight for justice for not just for Black people but for all people.”

Douglas said that to continue to progress toward racial justice requires that people build relationships across ethnic boundaries and to learn compassion for others.

“Relationships are so important to build and understand people, to not just have empathy for other people but to have compassion for others,” she said. “Compassion is to want to make a difference in another person’s life, to be that person who walks beside another person, to feel what they feel and to help move them to the next level.”

Turner said the importance of the event was to demonstrate that the people of Pine Bluff were standing with others around the nation to honor Lewis’ life and legacy.

“He fought for civil rights, for voting rights, he was a man who fought for all people and spoke on their behalf,” he said. “We felt that if he could march across Edmund Pettus Bridge, knowing there were people with iron pipes and billy clubs and whatever else they needed to stop them from voting, we felt that if he could do that for us, because we are standing on his shoulders, that we could do this for him to let other people know that we appreciate John Lewis.”