FAYETTEVILLE — The expanded library voters asked for four years ago is almost ready.

Construction of the 82,500-square-foot expansion to the Fayetteville Public Library is about 85% done, said David Johnson, library executive director. There’s drywall, painting, cabling, flooring and a few other pieces left to go, he said.

He’s planning for a mid-November opening.

The expansion will nearly double the size of the 88,000-square-foot library. The space will double for youth services including preschool, grade school and teen areas. Areas for people to collaborate, work, study and learn will increase. A 700-seat multipurpose room will serve as a midsized venue. Genealogy research gets a dedicated section. More parking will accommodate patrons.

Residents named those five features at public input sessions, and officials included them in a 2013 master plan to guide expansion.

Library administrators thought they could do more after taking tours of libraries across the globe, Johnson said. They added an innovation center, including professional-grade studios for audio, video and photography production, as well as labs for robotics, virtual reality and simulators for job training. A teaching kitchen and deli also were added.

A courtyard, larger than the downtown square, will face West Avenue and serve as a gathering space tying into the arts corridor the city is building as a separate project.

Once the stairway connecting the existing library’s third floor to the expansion’s second floor is finished next month, the vision to make two become one will be complete, Johnson said.

The tax rate will be lowered to 2.5 mills once the construction bonds are paid off in about 20 years, officials said. The remaining 1.5 mills of the increase will remain and cover the cost of operating the expanded building.

The original plan was to hold a grand opening Oct. 9-10, marking the 16th birthday of the original Blair library. The pandemic derailed that plan, Johnson said.

The project is about a month behind. The pandemic caused supply chain issues, Johnson said. For example, the plant in England that makes the movable furniture for the multipurpose room shut down for two months. The elevator manufacturer the library selected had factory issues as well, he said. Getting the lights from overseas was delayed.

Library administrators ordered many parts earlier than needed, so the delay could have been worse, Johnson said. Construction crews also were able to compensate for lost time with other aspects of the project.

The library closed in March because of the pandemic. That presented an opportunity to cut the hole in the floor for the staircase connecting to the expansion without disrupting patrons and to do other interior work at the existing library, Johnson said. Most of the work was done by the time the library reopened May 18, he said.

The tentative plan is to have the newly expanded building open to the public by the second week of November, Johnson said. Parts of the library may be unveiled piece by piece to avoid potentially drawing large crowds, he said. Administrators also are thinking about having people reserve times to take a tour.

Libraries across the country have been doing what they can to continue to provide services during the pandemic, said Michelle Jeske, president of the Public Library Association and director of the Denver Public Library. Programming has shifted online and e-books have increased in popularity, she said.

Some libraries are allowing people inside, some aren’t, she said. Library responses have been as varied as local and state responses regarding the pandemic, she said.

Libraries exist to provide communities resources, Jeske said. The digital divide, meaning the disparity between families who have access to the internet and those who do not, likely will grow as the pandemic continues, she said. Student learning will get more difficult with remote instruction. Unemployment continues to plague the workforce.

People need what libraries can offer now more than ever, Jeske said.

“We’ll be on the other side of this eventually,” she said. “It makes sense to have these community centers be there and available for folks.” 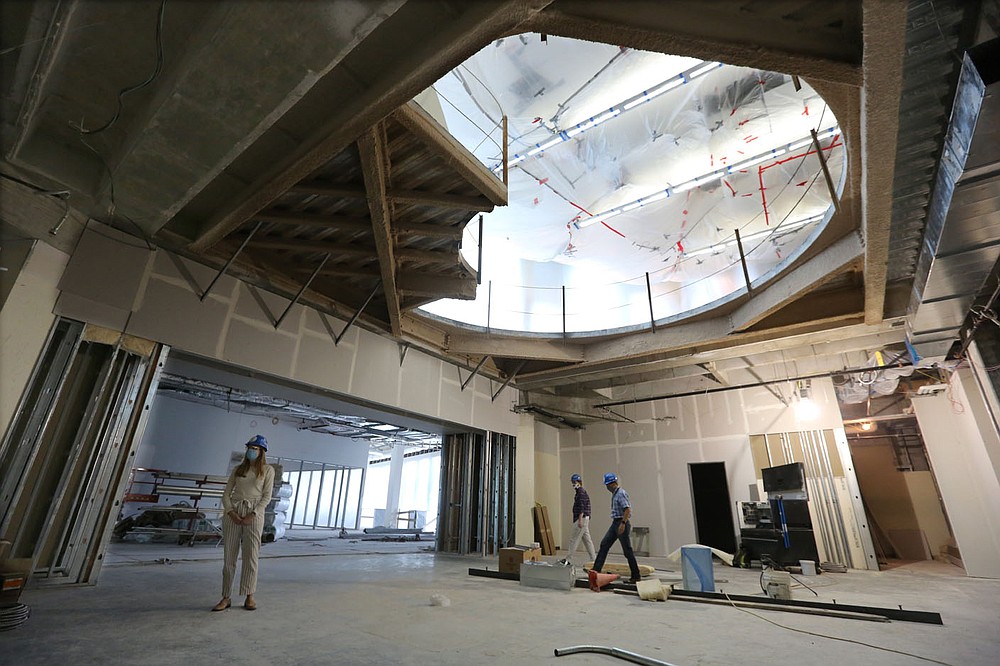 The area where the grand staircase, the linch-pin of the expansion and the existing structure, is visible Thursday, July 30, 2020, during a tour lead by David Johnson, executive director of the Fayetteville Public Library, and Roxi Hazelwood, development and sponsorship coordinator with the Fayetteville Public Library Foundation, of the new expansion area of the library still under construction. The new addition of 82,500-square-feet will nearly double the size of the 88,000-square-foot main library. Check out nwaonline.com/200802Daily/ and nwadg.com/photos for a photo gallery.
(NWA Democrat-Gazette/David Gottschalk) 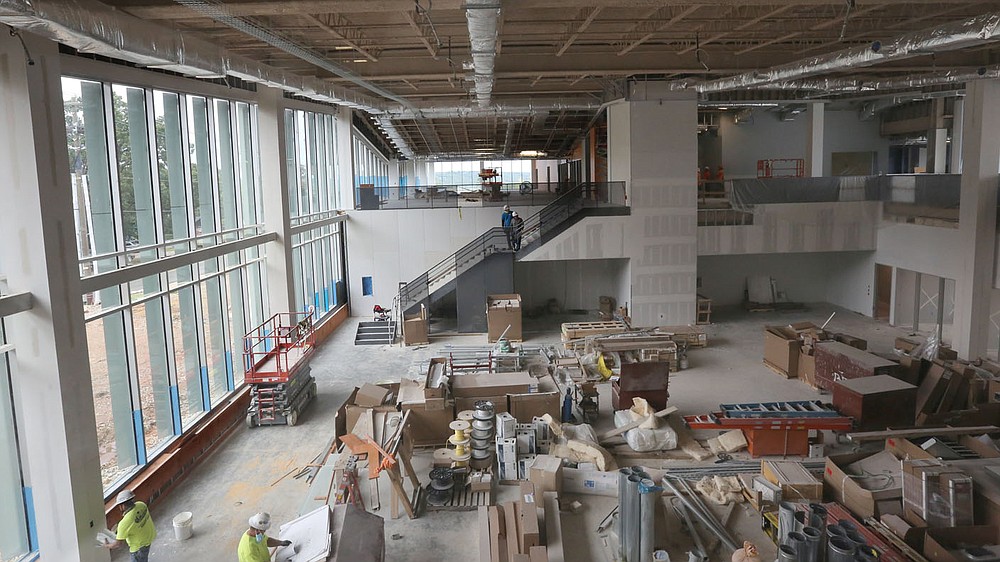 An area of the children’s section Thursday, July 30, 2020, of the the new expansion in the Fayetteville Public Library still under construction. The new addition of 82,500-square-feet will nearly double the size of the 88,000-square-foot main library. Check out nwaonline.com/200802Daily/ and nwadg.com/photos for a photo gallery.
(NWA Democrat-Gazette/David Gottschalk) 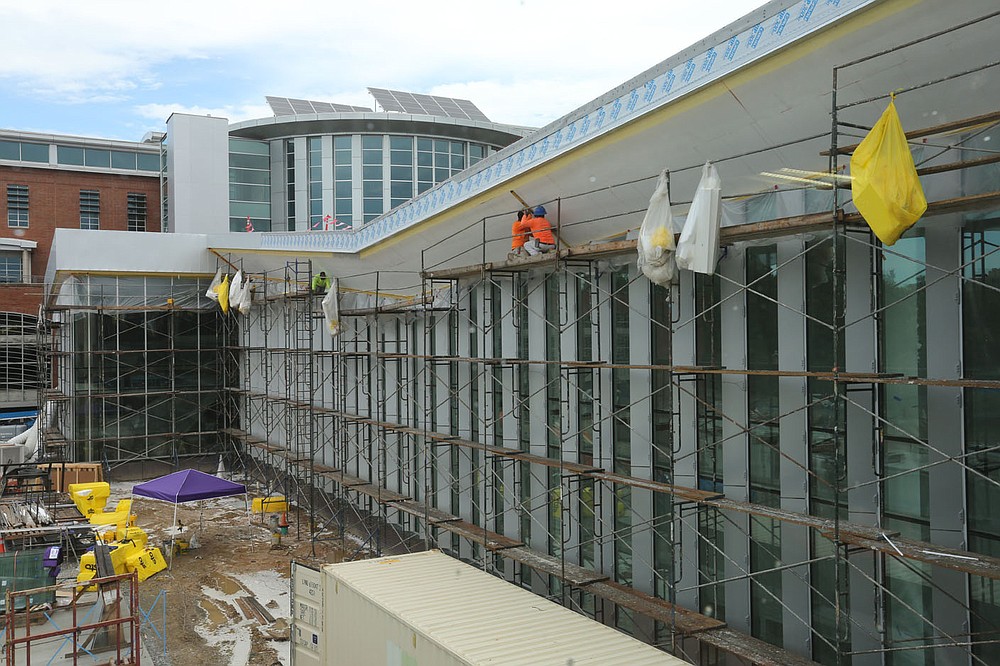 A view of the west facing side Thursday, July 30, 2020, of the the new expansion in the Fayetteville Public Library still under construction. The new addition of 82,500-square-feet will nearly double the size of the 88,000-square-foot main library. Check out nwaonline.com/200802Daily/ and nwadg.com/photos for a photo gallery.
(NWA Democrat-Gazette/David Gottschalk)
More News

For more information, go to: