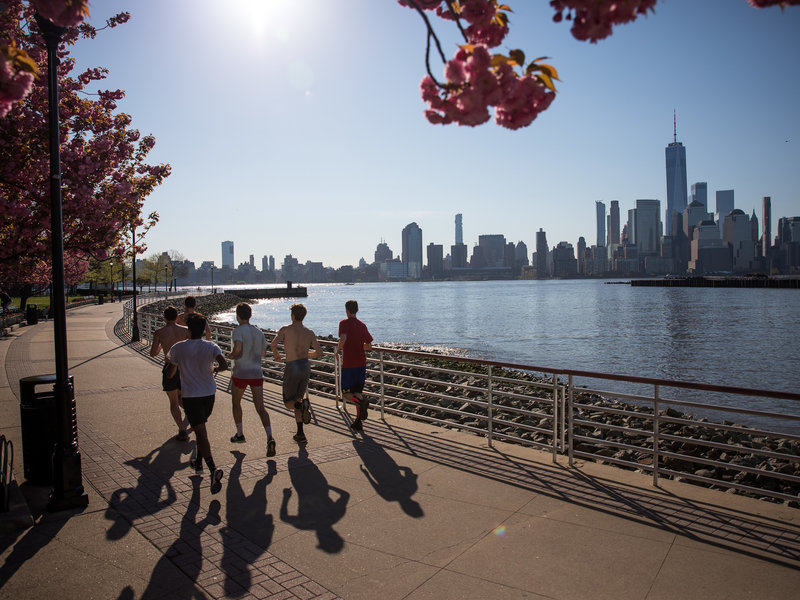 For New York City’s legion of runners, the mass starts might be gone, but not the races.

With all in-person events cancelled for the foreseeable future, virtual racing is booming. Organizers big and small, piggybacking on the upswing in running as a way to cope with the stresses of lockdown, have seen participation soar. The New York City Marathon, one of the biggest road races in the world, canceled its 50th anniversary edition because of Covid-19. It now expects record numbers to sign up for its virtual event.

Of course, like just about everything else in what was once the epicenter of the pandemic, things look and feel a little different. No crowds, no tables of water or Gatorade, and in many cases, no official routes.

On a recent Wednesday night, the competitive triathlete and trail runner began his first virtual race — the Take the Bridge challenge — by snapping a photo of his wristwatch over a checkpoint tagged on the East River pedestrian path. The course, just over six miles, would take him across the Manhattan Bridge into Brooklyn, where he would take another selfie before racing back over the Brooklyn Bridge for one final photo.

“Competition is a like a drug to me,” O’Neill said, adjusting a black and white bandana over his face. “I’ll be back in half an hour.”

Take the Bridge is just one of dozens of virtual events that have taken off this year. NYCRUNS hosts a 245-mile challenge equal to the length of New York’s subway system. The Dashing Whippets is holding a Tour de Summer stage race inspired by the French cycling competition. And New York Road Runners offers 19 virtual races, including the New York City Marathon, which opened for registration this past week.

“We expect this year to be the biggest ever, by far,” said NYRR spokesman Chris Weiller.

Entrants can run the virtual race any time from Oct. 17 to Nov. 1, anywhere in the world. Runners will have to chart their own course and figure out critical logistics, like where to get water or go to the restroom. And they’ll have to make do without first-aid tents and cheering spectators waving and handing out bananas. Sinatra won’t be bellowing “New York, New York” at the start line. Also missing — elite runners.

“I can’t imagine going into the races without the crowd,” said Aliphine Tuliamuk, 31, who won the U.S. Olympic marathon trials early this year and planned to race New York after going to the Tokyo Olympics. “I don’t see a situation where we would be able to go racing again without a vaccine.”

What the future of in-person road racing will look like is less clear. Races that usually have thousands of runners — like the JPMorgan Corporate Challenge for example — may have to be a fraction of the size. Already-staggered starts will become even more staggered and runners may need to carry their own water, according to NYRR Race Director Jim Heim.

Right now, “anything over 10 people is scary to a lot of people,” said Darcy Budworth, founder and race director of Take the Bridge. “If we ever go back to running in real life in New York City, it’s going to be small to start off.”

Budworth was cheering at the Fort Greene checkpoint when O’Neill snapped his selfie. The Priceline business developer clocked in at 33:40, or 5:37 per minute, winning the top seed.

Just then, James Nunciato strolled in, winning cheers simply for donning his usual race kit: a banana costume adorned with the Crown Heights Running Club logo, along with a mask. The 34-year-old, who was about to race for the first time in months, was doubling up on virtual events. The race would also get him 6 miles closer to finishing off the subway challenge.

“I run for fun, to stay healthy and to stay in shape,” he said. “What I miss the most is the comaraderie.”