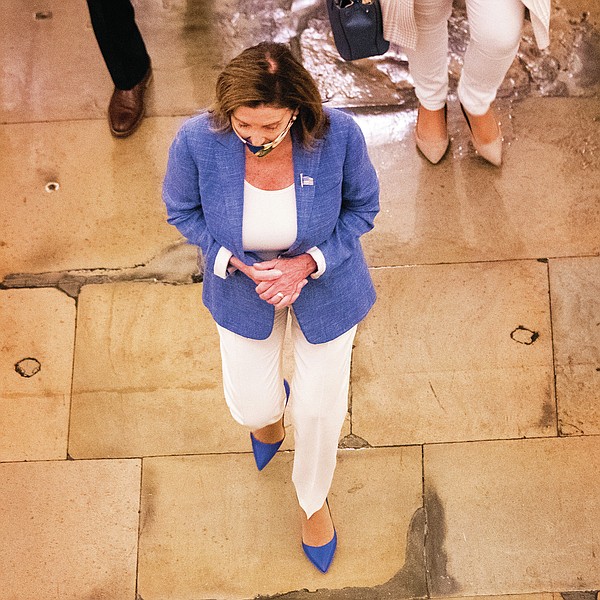 WASHINGTON — Negotiations between top White House officials and congressional Democrats on coronavirus relief legislation showed signs of progress on Saturday, although negotiators had not yet struck a deal.

The action takes place after days of stalemate that caused 30 million Americans to lose emergency federal unemployment benefits when they expired Friday with no agreement on an extension.

At stake beyond the $600-per-week jobless benefit is a fresh $1,200 direct payment to most Americans, and hundreds of billions of dollars in other aid to states, businesses and the poor, among other elements.

Emerging from a three-hour meeting with Treasury Secretary Steven Mnuchin and Mark Meadows, the White House chief of staff, House Speaker Nancy Pelosi, D-Calif., and Senate Minority Leader Charles Schumer, D-N.Y., said they had had the most productive discussion to date.

“This was the longest meeting we’ve had and it was more productive than the other meetings,” said Schumer. “We’re not close yet, but it was a productive discussion — now each side knows where they’re at.”

“It was the best discussion we’ve had so far, and I’d call it progress but a ways to go,” he added.

He said aides would be meeting todayto go over details, and the principals would meet again Monday.

Mnuchin and Meadows agreed as they addressed reporters at the Capitol a short time later.

“It’s time to make a deal,” Meadows said. “And if we’re going to be able to succeed in this, it’s taking what started as probably the first day of a good foundation, productive discussions and building upon those until we reach an agreement, hopefully in the next couple of days.”

It was a change of tone from Friday, when Meadows and Pelosi exchanged public criticism about who was to blame for the expiration of the federal unemployment benefits at a time of enhanced economic uncertainty.

White House officials have been trying to get Democrats to agree to a short-term fix that would extend the unemployment benefits and address a handful of other items such as continuing a moratorium on evictions that also recently expired.

[Video not showing up above? Click here to watch » https://www.youtube.com/watch?v=eRbIv6ri0NI]

Pelosi mentioned food aid and funding for voting by mail after the negotiating session was over. She and Schumer appeared more upbeat than they have after earlier meetings.

“We have to get rid of this virus so that we can open our economy, safely open our schools, and to do so in a way that does not give a cut in benefits to American workers,” Pelosi said.

“We’re still a long ways apart and I don’t want to suggest that a deal is imminent because it is not,” Meadows said afterward. “There are still substantial differences, but we did make good progress.”

Whatever unemployment aid negotiators agree on will be made retroactive — but antiquated state systems are likely to take weeks to restore the benefits.

Democrats, whose starting point is a $3 trillion bill the House passed in May, have been holding out for a more comprehensive response.

Mnuchin said Saturday that even as the two sides were finding areas of agreement on policy, there was still disagreement on the best way to move forward legislatively.

“They’ve made clear that there’s a desire on their part to do an entire package; we’ve made clear that we are willing to deal with the short-term issues, pass something quickly, and come back to the larger issues,” Mnuchin said. “So we’re at an impasse on that.”

Nevertheless the positive comments after the meeting suggested that the two sides might finally be heading toward a deal, after four-straight days of meetings.

Congress has not acted since spring even as the coronavirus has been spiking, and the economic recovery has stalled. More than 154,000 Americans have died as of Saturday, according to a running tally by Johns Hopkins University. More than 4.6 million Americans are known to have been infected with the virus.

“Millions are on the verge of eviction. People need resources in order to meet the needs of their families,” Pelosi said. “This is not a usual discussion, because the urgency is so great.”

Mnuchin said the two sides agreed on the need to extend unemployment insurance and the eviction moratorium and provide money for schools and small businesses. Vast differences remain, though, including Senate Majority Leader Mitch McConnell’s demand for a liability shield for businesses, health care providers and others, and Democrats’ demand for $1 trillion in additional aid to cities and states.

“This is a very different kind of negotiation, because of what is at stake. Millions of children are food insecure, millions of families are at risk of eviction, and for the 19th-straight week, over 1 million Americans applied for unemployment insurance,” Pelosi said.

McConnell was home in Kentucky on Saturday and did not participate in the negotiations, which he’s largely left to administration officials. But Meadows and Mnuchin said they were keeping him and Trump closely apprised of developments.

Senate Republican leaders waited until last Monday to release a $1 trillion bill that was their response to the Democrats’ plan, but it immediately encountered resistance from within the Senate GOP conference. The White House quickly abandoned it and began pushing for some kind of short-term fix for the unemployment benefits.

The Republicans have floated a few plans for extending the enhanced unemployment benefits, which come on top of whatever states already offer. Republicans say the $600 weekly payment is so generous it provides a disincentive for people to return to work, though Democrats disagree. One approach that’s attracted GOP support would reduce the benefit to $200 weekly, or a formula that would replace around two-thirds of a worker’s wages before the job loss.

Democrats insist any such approach is insufficient for the need in the country and the fragile state of the economy, which could suffer overall from the evaporation of the benefits that have helped newly unemployed workers pay rent and buy groceries.

The stimulus package will be the fifth legislative response to the pandemic and could well be the last one before the November election. The only other must-pass legislation on the agenda is a stopgap spending measure that should advance in September.

Since May, Republicans controlling the Senate had kept the relief negotiations on “pause” in a strategy aimed at reducing its price tag. But as the pandemic surged back over the summer, Republicans displayed greater flexibility.

Information for this article was contributed by Erica Werner and Rachael Bade of The Washington Post; and by Andrew Taylor of The Associated Press.